Telugu actress and TV personality Lakshmi Manchu filled up her Instagram feed with glimpses of her daughter Vidya Nirvana’s sixth birthday celebrations from June 15. On her Instagram story, Lakshmi revealed that Telugu superstar Prabhas had a surprise in store for the birthday girl. The Baahubali actor made Lakshmi Manchu’s daughter’s birthday all the more special by joining the celebrations on a video call. How cute is that? Lakshmi shared a glimpse of Prabhas and Vidya’s video session on her Instagram story and wrote: “When Prabhas surprised her on her birthday.” In the photo, the birthday girl’s smile says it all about how special the video call with Prabhas was to her. Here, take a look at Lakshmi Manchu’s Instagram story. 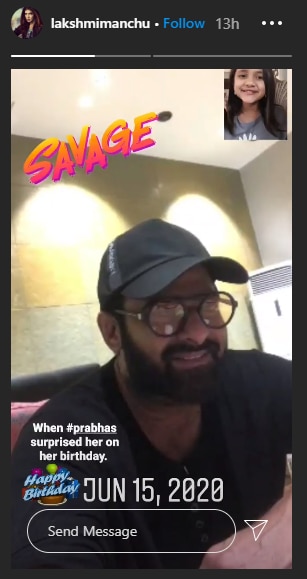 Lakshmi Manchu is the daughter of Telugu actor and filmmaker Mohan Babu, who shared a close bond with the Baahubali actor. Prabhas, who shot to fame with Baahubali, has worked with Mohan Babu in films such as Bujjigadu and Deewar Man Of Power.

Meanwhile, here’s how Lakshmi Manchu turned her Instagram into her daughter’s birthday album. She also wrote this adorable note for her daughter: “To my angel who turns 6 today! Thank you for showing me the meaning of unconditional love and for always being a gentle soul. You bring joy in not just my life, but in all lives that you touch. May you be abundantly blessed and achieve all that you want in life. You are my sun, my moon and all my stars! Happiest birthday Vidya Nirvana Manchu Anand.”